Nicaragua: "The Land of Lakes and Volcanoes"

Located in Central America, Nicaragua derives its name from a tribal chieftain, who ruled in 1522, and from the Spanish word for “agua,” which means “water.” The country, often referred to as the “land of lakes and volcanoes,” is home to two of Central America’s largest freshwater lakes: Lake Managua and Lake Nicaragua.

Nicaragua’s geography covers a diverse range of elevations, starting at sea level, by the Pacific Ocean and Caribbean Sea, to a height of almost 7,000 feet (2,110 meters) at the summit of Volcan San Cristobal, the highest volcano in the country, located in the northwest region.

Not only is the country home to some of the world’s most beautiful beaches, one-fifth of Nicaragua’s land area covers national parks, nature reserves, and over 75 protected areas, including lagoons, monuments, reserves, and archipelagos.

Part of the Caribbean area, Nicaragua sits between the Caribbean Sea and the Pacific Ocean in Central America. The country’s natural iconic landmarks include the strato volcano, Momotombo, which sits to the north of Managua, the capital, and Lake Nicaragua, a favorite tourist destination. Situated on the shore of Lake Nicaragua, the city of Granada is known for its diverse bird species and Spanish colonial architecture.

To truly get the Nicaraguan experience, you have to try the country’s cuisine. While you will see fast food chains, such a McDonald’s, in Nicaragua, you can’t truly experience the country’s culture and traditions without sampling its local foods.

For example, Guirila, which originates from the Matagalpa region in north Nicaragua, represents a type of tortilla made with corn. The tortilla, which features a thick dough, is cooked in banana leaves, and topped with a crumbly white cheese.

Nicaraguans commonly fry plantains because of their easy access. Therefore, tajadas are plantains that are cut vertically or horizontally, then fried. Locals serve tajadas with small amounts of white cheese or include it as a side dish with a main meal.

Similar to tajadas, tostones represent fried plantains that have not yet ripened. Pounded or sliced before being deep fried, tostones unleash a more savory taste than their ripened counterparts.

Nicaraguan cuisine includes a unique sampling of dishes, depending on the part of the country you visit. For example, the food along the Caribbean coast has a distinct Caribbean influence. Nicaraguans place a great emphasis on using local ingredients, such as plantains and coconuts.

Therefore, if you travel to other Central American countries, the foods you eat will be different than what you find in Nicaragua. The foods in Nicaragua belong to Nicaragua, although some of the foods in coastal areas will be similar to dishes found in other locales, such as Jamaica.

Some Nicaraguan dishes may substitute ingredients, such as yucca or cabbage, for re-fried beans as well. For example, the tamales served in Nicaragua, called Nacatamales, use corn dough stuffed with peppers, pork, onions, and tomatoes, along with distinctive seasonings.

When visiting Nicaragua be sure to taste the national dish, Gallo Pinto, which is made of rice and beans. Nicaraguans consider this dish a staple and national symbol.

Besides Nicaragua’s delicious cuisine, you can enjoy a full day of activities while visiting the country. Although Nicaragua is the largest country in Central America, it also happens to be the most sparsely populated. Therefore, the country is well-suited to anyone who wants to pursue off-the-grid travel.

While Costa Rica, to the south, regularly attracts tourists, Nicaragua does not have the same type of appeal. If you are seeking to journey down a road less traveled or want to find a rain forest adventure that fits within your budget, Nicaragua may be a good choice.

In fact, adventure travelers often direct their sights on Nicaragua, as the country features the largest area of rain forest north of the Amazon. The country also features 550 miles of shore and 6 active volcanoes. The Colonial towns, Leon and Granada, regularly welcome visitors who wish to go at a slower pace.

Nicaragua’s Pacific side draws more travelers, as visitors can navigate the roads more easily, and the area boasts several popular destinations along the coast. Grenada, Lake Nicaragua, and San Juan del Sur all are tourist-friendly sites.

The Caribbean side of Nicaragua features the Mosquito Coast, a name given for an indigenous tribe in the area, not for the annoying insect. However, that does not mean you won’t run into these biting bugs as well.

While the Mosquito Coast can be difficult to access by car, tourists can still charter planes at the airport in Managua. You can then fly to the airstrip in the beach town of Bluefields which serves as the gateway to the Pearl Keys and Corn Islands, both which feature stunning white sand beaches, gleaming blue lagoons, and delicious creole menus at local restaurants.

If you still want to know what to include on your trip itinerary to Nicaragua, the following suggestions should help.

While planning a trip to Nicaragua, you may want to consider visiting or doing the following:

• Visit the Miraflor Nature Reserve and learn more about the area’s indigenous plants and wildlife.
• Enjoy volcano-boarding on the black-sanded slopes of Cerro Negro.
• Snorkel or scuba dive off the shores of the Pearl Keys or Corn Islands.
• Go horseback riding along the beach.
• Board a ferry from Granada on Lake Nicaragua and travel to Las Isletas and Ometepe Island, two of the 360 islets located in Lake Nicaragua.
• Stroll through Grenada and enjoy its Colonial architecture.

Nicaragua has two seasons – one that is wet (the winter) and one that is dry (the summer). Therefore, most people choose to visit the country in the summer, or from December to April, to avoid getting drenched by the rain. During the rainy season, from May to November, showers occur daily.

While planning your visit and before arriving, be sure to check with your doctor about getting the appropriate vaccines, including malaria medicine. You will also have to wear apparel that will protect you from the sun and bites from insects. To ensure travel safety, visit the U.S. State Department website for updates and travel advisories in Nicaragua.

Things to Do and See

Nicaragua has 910 km (570 mi) of coastline and 16 islands in the Pacific and Atlantic Oceans. From north to south (vertical measurement), the country measures about 472 km (293 mi) in length and about 478 km (300 mi) at its widest position.Much of Nicaragua is considered to be a biodiversity “hot spot” by environmentalist and international organizations striving to protect endangered species and rain forests throughout the world.

The head of the Ecuador Government is the President who also serves as the head of state. Nicaragua has three branches of government: Executive, Judiciary, and the Legislative (national Assembly). Politically, Nicaragua is a divided into 15 departments, or administrative subdivisions and two self-governing regions- the North Caribbean Coast and the South Caribbean Coast regions. The administrative subdivisions are further divided into 153 municipalities.  Nicaragua is a member of the United Nations, Organization of American States (OAS), and World Trade Organization (WTO), and the United Nations Framework Convention on Climate change. 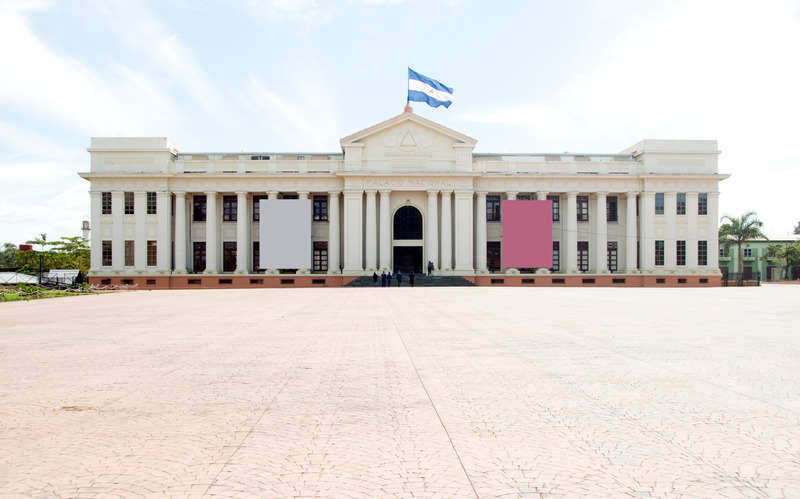 Below is our country profile containing facts and information to familiarize you with Nicaragua.

What currency is used in Nicaragua?

The official currency of Nicaragua is the Córdoba commonly represented by the symbol (NIO).

Where should I visit when travelling in Nicaragua?

Nicaragua is one of the lesser travelled tourist destinations in Central America but that does not detract from its unique character and its undiscovered and unspoiled destinations.  If you like outdoors, you may plan to visit one of Nicaragua’s many nature or wildlife reserves like the one at El Jaguaror to explore one of its 40 active or extinct volcanoes such as Maderas, Concepción, and San Cristobal. Adventures and outdoors men can see seen trekking though exotic rain forests or summiting challenging mountain peaks dotting the landscape in the Pacific or Atlantic lowlands which offer stunning views. Wildlife enthusiasts should consider planning a wildlife excursion here they can marvel at sea turtles or pass the time bird watching.

For visitors preferring to explore cities and towns, Nicaragua has a variety of charming historical landmarks and national treasures spanning from coast to coast. Some of our favorite attractions include museums such as the National Museum,the Convent of San Francisco, theatres such as the Rubin Dario National Theatre of Performing Arts, and galleries such as The Ortiz Gurdián Foundation Art Center and The Claro Oscuro Art Gallery in La Calzada.

When is the best time of year to travel to Nicaragua?

There is no best time of year to travel to Nicaragua. Having three distinct geographic regions, the climate is different but temperatures are generally warm yet comfortable.  Although the topography of Nicaragua is mostly comprised of lowlands and plains, the Nicaraguan highlands have extensive rain forests, mountains, volcanic peaks and rivers.  With such a diverse landscape, temperatures in the lowlands range between 29 and 32 °C (85 and 90 °F) with annual precipitation of approximately 40-60 inches.  In the highlands, the weather is cooler and wetter with temperatures commonly in the range of 24 to 26 °C (75 to 80 °F).

What are some of the “must see” places in Nicaragua?

Visitors to Nicaragua can take guided tours or create their own customized itinerary to enhance their travel experiences.  Many travelers are attracted by numerous water sport activities such as scuba, surfing, or fishing in San Juan del Sur or El Velero. Other memorable places to see include the Cathedral of Leon, the Church of Jalteva , and the Ruins of Leon Viejo.  As well as the destinations featured in our map and area guides.

How expensive is Nicaragua?

Youth hostels and accommodations are plentiful with season prices ranging between USD$10 and USD$15 a night.  In the capital of Managua and smaller cities, hotel prices range from $15 to $50 a night with some higher rated hotels and resort accommodations priced in the USD$48 to $150 a night.  Naturally, the cost of international flights vary from your place of origins but domestic flights are reported to be very affordable. Rental cars are available and bargains abound but depend upon time of visit.  Cruises are common to Nicaragua with weekly arrivals from most foreign ports of call.

Travel budgets should reflect the cost of dining out (good meals at nice restaurants can be priced at $5 to $10 dollars each).  Guided tours can be pricy but anticipate paying between USD$25 to USD$100 a day).  Prices can also vary significantly between regions so remember budgeting for entrance fees to national parks and wildlife refuges especially those to remote areas.

Do I need a visa to visit Nicaragua?

Depending on your citizenship and country of origin, a visa and other travel documentation may be required to visit or study in Nicaragua.  For most visitors from the Americas and Europe and a visa is not required to enter Nicaragua but such stays are generally limited to 90 days. A visa is required if planning to stay longer than 90 days.  All visitors must hold a valid passport for 6 months, be able to demonstrate proof of sufficient funds, and produce documentation for their next destination.

This site is supported by ads. Please help us out and disable your ad-blocker.